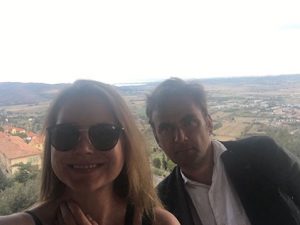 “As I write this, the whole of Iceland is covered in snow, it’s dark for 15 hours a day and minus five degrees Celsius. Lovely though it is (apart from the occasional gales and blizzards), after a few months of darkness, you start dreaming of sitting somewhere in the sun with a book and a drink.Not to mention, this month is the traditional feast of roasted sheepheads, ram’s testicles, fermented shark-meat and other delicacies and after a few bites you think longingly of the Mediterranean diet and the mind wanders to the south.Italy has always been a preferred destination of ours: We’ve been drawn towards the culture, the food, the history, the people; we’ve been there six times in the last eight years.Last summer, we came back from a hiking tour of the area around Montecatini Terme. As part of our preparation, we had watched an interview with Frances Mayles where she talked about Bramasole and Fulvio and the experience of living in Tuscany. Maybe that was part of the reason why we wondered, during our hike, if there was any way we could invest in a house, flat, even a hole in the ground in Tuscany and return there every year.When we came back we started looking and found Borgo’s website. We just had this feeling when we looked at it, that this was it, this was what we were looking for.We asked for a discovery visit right away and were back in Italy a few weeks later.Borgo was everything we had imagined: A small and beautiful village, a bit out of the way, where you could sit and read in the sun, hike around the woods and the hills and use as a base for trips all around Tuscany and Umbria, meet new people or be on your own, cook at the flat or eat at the trattoria. It had a wonderfully welcoming atmosphere, as well.Financially, it was a luxury but affordable and it was an ownership not a timeshare.As we saw it, it was first and foremost an investment in a lifestyle. So, after having thought about it for some weeks, we decided to buy a share and we hope to have the opportunity to go there every year for some rest and recreation.”Arnar Matthíasson